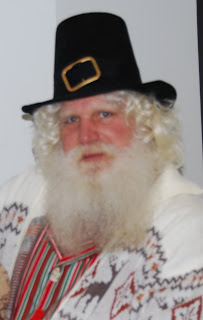 Thanksgiving is now over, but we have so many things to continue to be thankful for.  Santa Randy comes from such a large family of 10 children.  It never ceases to amaze me that they are and continue to be a close knit family.   I feel so Blessed to be a part of it.  Although they lost their parents way to early in life, the tradition of gathering for holidays is carried on.  The poppy kuchen is still freshly baked and brought to share at our holiday gatherings.   How proud Art & Priscilla must be when looking down from Heaven upon our celebrations together.  Thank you Lord for the Gift of Family !  Thank you Santa Randy for bringing me into your family.  I cannot imangine my world without you all in it. 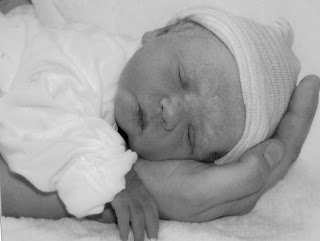 We are thankful for new born babies, Santa's favorite visits !

I have heard from other professional Santas and their wives how there will always be at least one child a year who will get your phone number off the internet or a business card their parents have been given and ring your phone off the wall.  Well......today was the day !  A young boy by the name of Corey seems to be up to some mischief on this Saturday......25 calls in about 10 minutes.

I finally answered a few of the calls with "Ho Ho Ho, someone is going to be on the Naughty list "...but that didn't get him to stop.  I then answered  "I guess someone doesn't want any presents this year."  It been silent for about 5 minutes now.....

I guess there is a hazard to every job !  Still quiet.....I guess Corey found something else to do !
Posted by Santa's Mrs. C at 5:30 PM No comments: 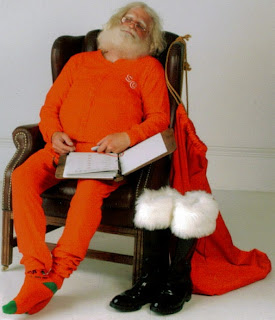 Santa's been working some very late nights getting his naughty and nice list updated. New elf reports are coming in quite rapidly......it seems everyone is really trying hard to move up to the nice list in this late month of November............NOW you are going to be GOOD ?!?

Well I guess, better late than never !! Every year, thousands of children young and old, just squeek under the wire !

Maybe next year, you could start a little earlier ! It sure would help Santa.

NORTH POLE HEADQUARTERS, ARCTIC CIRCLE, 12/22/2009 --- Once again, Santa Claus' Royal Palace and Toy Workshop came alive this evening as a mass assembly of Elves, Helpers, and Immortals of Civilized History gathered together to listen to the words of their merry old leader, for this, his traditional "State of the Pole" Address, in which Santa, in accordance with his customary rituals, reviewed his various adventures at the closing of the year, and previewed the vast assortment of adventures that await him in 2010.

As usual, Mr. Claus made his comments in the Throne Room of his Palace, his dear wife of many aeons seated next to him. They had traded in their usual regular clothing for the royal robes and regalia of Their Serene and Royal Majesties, King Nicholas and Queen Vivianne, Lord and Lady Sovereign Monarchs of the Realm of Eternity. Here, by tradition, King Nicholas personally welcomes those who, at the end of their alloted time upon the Earth, have proven themselves brave, truthful and unselfish --- the required credentials needed in order to be granted permanent residency in the Realm of Eternity.

Welcome once more, my good friends, and Merry Christmas to you, each and all!

Once again, it is my distinguished pleasure to report unto you, my faithful subjects, concerning the previous adventures that have involved me in the year just past. And as always, we begin with our dear colleagues in Denmark. Where last year's World Santa Claus Congress went the silly route by designating Denmark's Hulk Hogan as their Santa of the Year, this year, our delegates at Bakken turned to Sweden's Royal Family and gave the title to someone far more sensible: Her Excellency the Duchess Camilla af Rosenborg, whose tireless efforts on behalf of children's cancer research were paid much honest tribute, and of course made Her Excellency well deserving of the honor. I'm sure those of us assembled here in the Workshop will agree with me when I say that the quality of giving can only reach its largest potential when someone decides to give something back. Duchess Camilla has demonstrated this more than I believe she will realize; and so, we accordingly salute her tonight.

As always, unfortunately, Christmas Eve Nights are not necessarily all fun and games. The recent news regarding the economic state of the world's countries continues to be monitored by our elven work-force even as I utter these words to you now. There are still many questions yet unanswered about the world's economy and its obvious impact on everything we do here at the Top of the World .... And I certainly hope we will make every effort to answer those questions.

Still another bit of big news that came our way in 2009 involved two significant mergers that will almost certainly have a profound impact upon my already heavy workforce. When two of the world's most famous toy retailers, Toys "R" Us and FAO Schwarz, joined their collective forces under the Toys "R" Us banner, there were few who figured that the deal would amount to much. But then, as we sometimes do, we underestimated the might of our friends at Disney. For an astonishing $4.1 billion, the Walt Disney Company has acquired the Marvel Entertainment Group! No doubt that even as I speak, Elves across the cosmos are wondering where the road that has brought these two together will take them. Even now, I sense that most of you are indulging in Marvel/Disney fantasy adventures in your chatrooms; no big whoop, no big deal here, etc.

But once more, it has been brought to my attention that the so-called "Santa wars" are once again causing disturbances from many of my impersonators throughout the United States; further, one of these, based in Atlanta, Georgia, is doubtless making it tougher for his loyal fanbase to see him, so much so that he has seen fit to charge $15, by appointment only, if there are those who wish to share an audience. In my day in time of old, I would not dare deny the children the opportunity to see me in person; and you all have my assurance that that policy remains effective for the forseeable future. Pinkie-swear!

Well, meanwhile, in California, there's bound to be an especially busy bunch of Santas doing their thing between now and next summer. You will all be happy to learn that the Hollywood Christmas Parade has had its old name restored; and that our very busy friend Tim Connaghan will be more than jolly, escorted at the end of the Parade, as per usual, by the Long Beach Junior Concert Band. Finally, there shall be two last summertime flings for us jolly old elves --- as Anaheim's famous Crowne Plaza Resort hosts the International Santa Claus Jamboree --- an event whose five days will be packed with so much energy that we'll barely have enough before we're all summoned back to the Gatlinburg, Tennessee Convention Center, for the second Celebrate Santa Festival and Holly & Shamrock Parade! Indeed, I would suggest that, by the time everything's all over, we'll all be ending up turning our thoughts back to our dear Bakken friends, and the 2010 World Santa Claus Congress!

There are so many adventures at the end of this season, and even more at the beginning. I am especially looking forward to welcoming President Barack Obama as he, First Lady Michelle Obama, and their two young daughters attend their first lighting of the National Christmas Tree in Washington, D.C.! This year, for the first time, those of our Elves in the D.C. area will be able to see the Ceremony on several selected PBS affiliates, most notably WETA/Washington; those of our Elves, meanwhile, who still have a passion for things C-Span are encouraged to watch the festivities at http://www.c-span.org just before my Christmas Eve journey.

And if you think I've been rather fast as far as journeying in my sleigh goes (that's presuming, of course, that I'll have time to get out of my royal raiments!), well, see what the good folks responsible for Pasadena, California's Tournament of Roses Parade have done --- and the strange part is, they've done it all at a pace even I didn't notice until quite recently! The Parade's 2010 theme has already been chosen --- "A Cut Above the Rest" --- reflecting the fact that, besides the Rose Parade and Rose Bowl College Football Classic, the 2010 Tournament will spotlight the Bowl Championship Series National Championship Game! The idea for this year's Rose Parade theme was chosen by Gary DiSano, who had been chosen to serve as President of the Board of Directors for Tournament Year 2009-2010. As Gary explained: "With thousands of spectators gathered along Colorado Boulevard, and billions more watching on television each January 1st, America and all the world look to Pasadena each New Year's Day to bring forth a celebration better than any other."

Sadly, Gary DiSano will not be among his fellow Mortals on Friday, January 1st, 2010 to see the results of what he assembled. Knowing how passionate Gary was about the Tournament of Roses, the Board of Directors has wisely decided to keep the event going as per scheduled, for it is, one surmises, what he would have wanted.

In keeping with the 2010 Parade theme of "A Cut Above the Rest," the Rose Parade folks have decided that only one person best exemplifies that concept. I watched with most of you on January 15th, 2009, as US Airways Flight 1549 plunged into the icy depths of New York's Hudson River. The remarkable courage perpetrated by a strong-hearted crew, led by Captain Chesley Sullenberger III, has since become the stuff of legend. Needless to say, the Tournament of Roses has chosen the man called "Sully" as their Parade Grand Marshal! Congratulations, dear Sully!

Lastly, I bring these remarks to their close with a few words about our future. As always, you know that we, the denizens of Santa's Workshop and Toy Factory, remain committed to keeping watch over childhood dreams in every timeframe across the cosmos; our history, our culture, and our repeated legend will, I'm sure, remind most of you that there are great and incredible adventures not yet accomplished. Together, with your help, this foolish but very Jolly Old Elf will continue to make Christmas magic come to life, anytime ... anyplace ... anywhere.

I only ask in return, as I have asked countless times before, that each and every one of you believe in me --- believe in us --- believe in all human beings, and their power to share the force of love. For without love, the human race cannot exist.

Well, my friends, that's that. I think I've had my say. I hope that the second decade of the Twenty-first Century will bring even more adventures and experiences to light .... for that is as it should be. And with those kind words, I say to you all, as I have said many aeons before and beyond ----

MERRY CHRISTMAS TO ALL, AND TO ALL A GOOD NIGHT!
Posted by Santa's Mrs. C at 10:22 AM No comments: 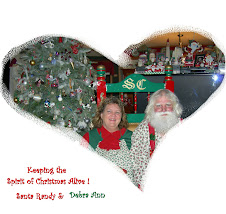